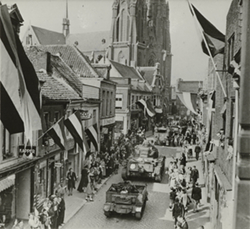 In this unit, we will examine the global impact of the World War II and look at why the United States and the Soviet Union emerged as economic, political, and military superpowers following the conflict. We will also examine how the war reshaped political, economic, and social life in Europe and Asia and led to devastating new military technologies, such as the atomic bomb. Finally, we will discuss how Nazi anti-Semetic ideologies led to the Holocaust, in which six million Jews and other minorities were systematically murdered from 1939-1945.