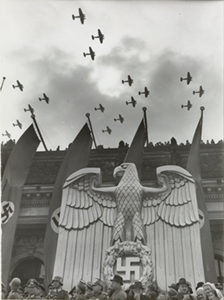 Week 12: The Second World War and the New World Order

By the late 1930s, anti-democratic governments in Europe and Asia were beginning to threaten the security of surrounding states. Nazi Germany occupied parts of Czechoslovakia and Austria in 1938. Great Britain and France declined to challenge German actions, fearing that a firm stance against Germany might provoke a new European war. The following year, Germany invaded Poland and set in motion a chain of events that led to the outbreak of World War II. In the Pacific, Japanese forces continued to expand their hold on China and the military prepared invasion plans for European colonies in Southeast Asia. Meanwhile, the United States chose to remain isolated from the growing conflict, as it had done during much of World War I.

America entered the war in December of 1941, following a surprise Japanese attack on American military forces in Hawaii. American troops joined British and French forces and began to prepare for an invasion of Nazi occupied Europe. In the Pacific, American and allied forces eventually checked Japanese military expansion and began to go on the offensive.Like the First World War, World War II was a global war and critical battles were fought across Africa, Asia, Europe, and the Pacific.