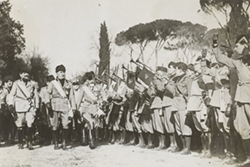 Week 11: The Rise of Totalitarian States in the 20th Century

World War I devastated Europe economically, politically, and socially. Great Britain and France blamed Germany for the conflict and imposed severe economic penalties and military restrictions on the German state. In Russia, Communist revolutionaries seized control of the government in 1917 and began to consolidate power and impose Communist rule throughout Russia. They attempted to turn Russia from an agricultural state into a powerful industrial nation that could rival the industrial states of western Europe. In Asia, Japanese leaders viewed western colonial powers with envy and began expanding the Japanese military with the goal of eventually establishing colonies throughout Asia and the Pacific.

Following the war, liberal democratic governments came into power throughout much of western Europe. Under these regimes, women received the right to vote in many states and workers were permitted to unionize. In states like Germany and Italy, however, democratic governments were weak and ineffective. After the Great Depression destroyed the German and Italian economies in the early 1930s, voters looked for more powerful leaders to guide them through the difficult times. As a result, the Nazi Party gained power in Germany, while the Fascist Party peacefully assumed control in Italy. Nazi and Fascist leaders promised renewed prosperity as they began to rebuild military forces in order to challenge the colonial powers of Great Britain and France. Meanwhile, in Asia, Japanese military forces landed in eastern China and began occupying much of Manchuria.

In this unit, we will take a look at the rise of Communist, Fascist, and Totalitarian governments in Europe and Asia. We will evaluate how economic, social, and political factors allowed profoundly anti-democratic governments to assume power in Russia, Germany, Italy, and Japan, and how these governments fundamentally reshaped life in these nations during the 1920s and 1930s.