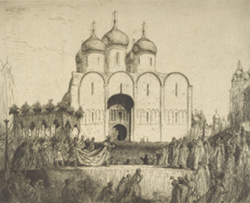 The Russian Revolution was a pair of revolutions in Russia in 1917, which dismantled the Tsarist autocracy and led to the eventual rise of the Soviet Union. The Russian Empire collapsed with the abdication of Emperor Nicholas II, and the old regime was replaced by a provisional government during the first revolution of February 1917 (March in the Gregorian calendar; the older Julian calendar was in use in Russia at the time). In the second revolution that October, the Provisional Government was removed and replaced with a communist state.

The February Revolution (March 1917) was a revolution focused around Petrograd (now Saint Petersburg), then capital of Russia. In the chaos, members of the Imperial parliament (the Duma) assumed control of the country, forming the Russian Provisional Government.The army leadership felt they did not have the means to suppress the revolution, resulting in Nicholas’s abdication. The Soviets (workers’ councils), which were led by more radical socialist factions, initially permitted the Provisional Government to rule, but insisted on a prerogative to influence the government and control various militias. The February Revolution took place in the context of heavy military setbacks during the First World War (1914–18), which left much of the Russian Army in a state of mutiny.

In the October Revolution (November in the Gregorian calendar), the Bolsheviks, led by Vladimir Lenin, and the workers’ Soviets overthrew the Provisional Government in Petrograd and established the Russian SFSR, eventually shifting the capital to Moscow in 1918. The Bolsheviks appointed themselves as leaders of various government ministries and seized control of the countryside, establishing the Cheka to quash dissent. To end Russia’s participation in the First World War, the Bolshevik leaders signed the Treaty of Brest-Litovsk with Germany in March 1918.