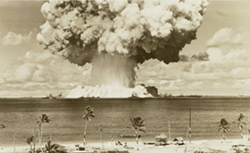 Week 14: The Cold War and Decolonization

Following World War II, many nations throughout the world began to ally themselves with either the democratic United States or the Communist Soviet Union. The resulting Cold War created profound political and economic divisions across the globe and weakened western European colonial powers, such as Great Britain and France. New international political alignments and the waning power of European colonial powers encouraged the growth of independence movements in many European colonies. Decolonization across Africa and Asia led to the emergence of new independent states. These new nations provided a battlefield for the struggle between Capitalist and Communist political ideologies. Due to their military strength, the United States and the USSR could not challenge each other directly, out of fear of mutual annihilation, but they engaged in a series of indirect conflicts in many of the young, developing nations throughout Africa and Asia.

In this unit, we will examine how Cold War politics affected life across much of Europe, Africa, and Asia during the second half of the 20th century. We will also take a look at how the United States and the Soviet Union engaged developing nations economically, technologically, and militarily as each superpower tried to gain political and military advantages over the other. Finally, we will study how nations in Europe and Asia responded to the Cold War by creating new economic and political alliances, such as the European Union.